Rita Wuebbeler was so ready for last year’s AIDS Vaccine 200.

She had ditched her slow hybrid for a speedier road bike, raised more than $2,000 to earn the AV200 jersey and shorts, and pushed herself hard with spin classes and training rides.

Four weeks before the event, her bike slipped off a wet road at the outset of a ride, throwing her down onto the gravel. In shock and embarrassed, Wuebbeler wanted to soldier on despite cutting her face, scratching her knuckles and skinning a thigh and knee.

But her friend Debra Snell insisted on taking her to the hospital. Getting checked out at Atlanta Medical Center, Wuebbeler learned she had broken her right wrist, dashing all her hopes to do two centuries and complete her first AV200.

“I couldn’t do the race. I couldn’t be with the team,” said the Jerusalem House rider, describing a range of emotions she felt after the accident — everything from disbelief to frustration and anger and then deep regret.

The setback, however, didn’t keep Wuebbeler from participating in the annual bike ride to benefit the Emory Vaccine Center. Not only did she volunteer, but she drummed up even more financial support for AIDS vaccine research and housing for low-income people affected by HIV/AIDS.

“I can’t do the race, [but] I’m going to continue fund-raising,” Wuebbeler said she thought to herself after initially considering stopping. She sent out emails with a photo of herself in a cast and eventually brought in more than $3,300 for Jerusalem House, the top fund-raising team.

Wuebbeler threw herself into volunteering, helping load a van with pit stop supplies the day before the ride and assisting Chris Bess with pit stop support during the AV200. The Saturday of the ride, she wore her Jerusalem House jersey for a team photo at Emory medical school and then headed out to the pit stops before riders began arriving on their way to Rock Eagle 4-H Center near Eatonton. She spent much of the first day with volunteers at the stops. “I was grateful for what they do,” she said.

Wuebbeler was up early the following day decked out in her new AV200 gear. Her smiling face and words of encouragement along the ride likely inspired many sweaty and weary cyclists to finish the long journey back to Emory. “You had to do all these hills,” she said of the route after the lunch stop in Jersey. “That really [seemed] hard. I had no idea.”

She had bittersweet feelings about not being able to ride but says she felt so much a part of the AV200. “I didn’t feel left out. In fact, I was so close to it.”

And that broken wrist hasn’t deterred Wuebbeler from riding this year.

“I’ll be the first one to sign up,” she said last May, when she still sporting a cast with an “evening lace” cover she ordered online.

“I don’t have a bucket list, but I have one item on it. This is my bucket list now. It’s almost an honor thing.”

Wuebbeler is no novice to biking. She was cycling long before it was cool.

Blessed with strong legs, she would bike to school and back 5 miles a day growing up in northern Germany near the town of Goldenstedt.

“We all had bikes,” Wuebbeler said of her family, which had eight bicycles. “My mom rode a bike to work every day for 50 years.”

Arriving in Atlanta in 1986 as part of work study program for young German professionals, she found the city’s hilly terrain and lack of bike lanes to be a turnoff. But she remained athletic, playing soccer for five years on a women’s team (she broke her left wrist then) and even doing bike rides such as Up the Creek Without a Pedal in Rome, Georgia.

She hadn’t planned on staying in Atlanta but grew to love the city and its people. She came out and developed a sense of community with strong friendships. “I’m an accidental immigrant,” said the 56-year-old, who has lived here nearly three decades except for four years when she moved to Canada so she could marry.

Now divorced, she returned home to metro Atlanta, where she had first started her own company, Interglobe Cross-Cultural Business Services Inc. , 25 years ago. Interglobe provides cross-cultural training, coaching, leadership development and team building to international firms. Her work involves everything from management training of Georgia employees of foreign companies to preparing families who are transferred abroad or those coming to the United States. She also does diversity training on lesbian, gay, bisexual and transgender culture.

“My work is very important to me,” said Wuebbeler, whose business requires her to travel frequently. “Biking provides a nice counterbalance.”

She decided to join the AV200 after supporting Debra Snell as a rider. She said the parade of cyclists finishing the 200-mile route at Emory’s medical school in 2014 inspired her.

“When I saw you all come in, I thought I could do this, too.”

She said she loves it when people reach their goals after a long, difficult struggle.

“Seeing Debra train so hard — it makes me cry, I wanted to do that, too.”

Not only does she enjoy the competitive spirit of sports, but Wuebbeler also marvels at how it creates a bond with others.

“I didn’t expect the whole camaraderie thing,” she said of the new people she met on her training rides before her accident. “All of the sudden you have 20 new friends.”

Wuebbeler no doubt will make a few more as she gears up for this year’s AV200. She already had plans for a neighborhood ride when her cast came off after Memorial Day.

To show her commitment, she posted a Facebook photo of herself holding up a sign following last year’s ride. “Awesome job, riders! 2016 AV200, here I come!” 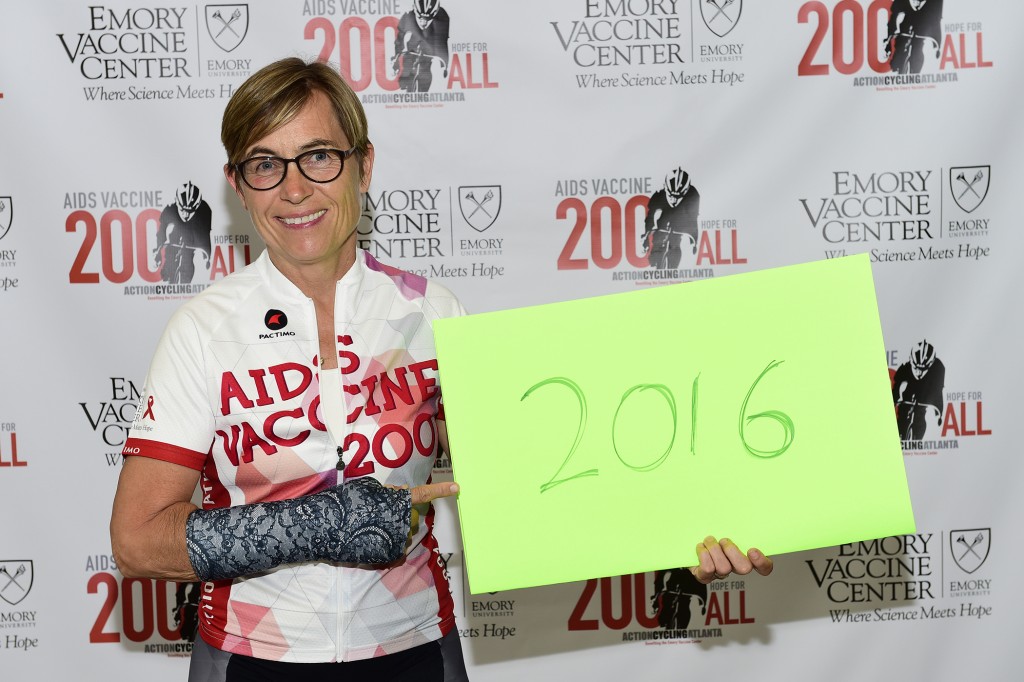